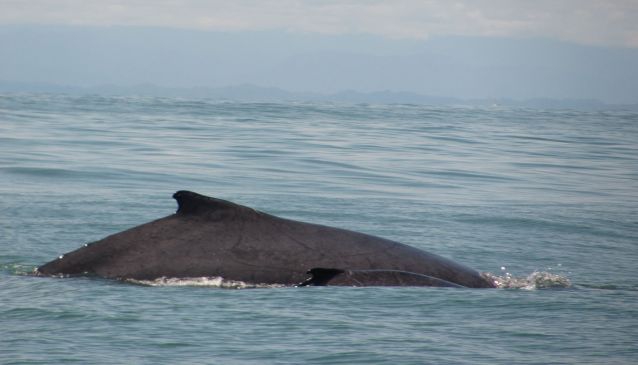 The sighting of humpback whales or Yubartas - Colombia

Directions to The sighting of humpback whales or Yubartas

Prototypes of humpback whales, migratory specie, embark on a journey of almost 8.500 kilometers from the Chilean Patagonia and the Antarctic Peninsula in search of warmer and quiet waters; remaining up to four months in tropical seas, mating and giving birth to their offsprings. They return to their home with their kids, once their gestation cycle is accomplished. The cycle is repeated in the following year. They have sociable behavior and swim in groups of 3-20 individuals. When they emerge, they perform showy pirouettes with jumps and tail strikes; when submerged, they arch themselves and only expose their tail out of the water. They emit sounds called songs in the breeding areas. Hundreds of specimens of humpback whales or yubartas are sighted by residents and tourists who enjoy the appearance and flirting of these species of sea giants, between July and October each year, in the Colombian Pacific region and in the coasts of Chocó Department. In jurisdictions of municipalities of Bahia Solano and Nuquí have been developed services of boats, boaters and guides, in addition to physical means, to facilitate their observation.

Despite the breadth and the approach of whales to points not too far from the beaches, the sightseen is a safe activity, as long as it is saved a careful distance, especially from boats when viewers do not repress their enthusiasm.