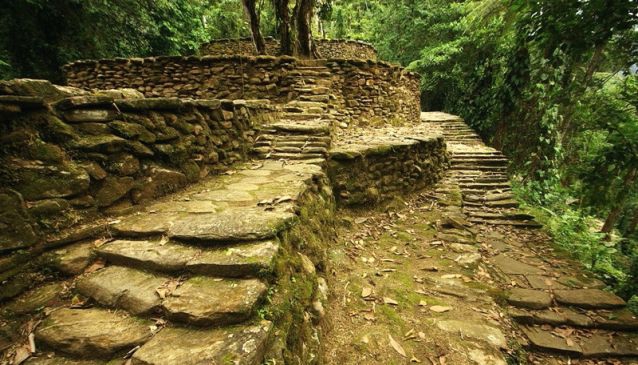 The Archaeological Park of the Lost City - Colombia

Directions to The Archaeological Park of the Lost City

The Lost City, also known as Teyuna, located in Sierra Nevada de Santa Marta on one bank of Buritaca river. It is accessed through forests, bridges, mountains and waterfalls, within a rainforest with 40 to 50 feet high trees. There, the ruins of the Tayrone empire are located, sophisticated mix of nature and civilization and a wonderful architecture of stone. It was discovered in 1975 by a guaquero and confirmed by the Bogota Anthropological Institute in 1976. The Lost City homes were built in stepped terraces, which were made of stone that made rings of five to eight meters diameter. According to anthropologists the city was built around the year 700 AC and was the largest urban center among 250 indigenous settlements discovered so far in Sierra Nevada de Santa Marta. Its population was between 1,400 and 3,000 inhabitants. The merit of the Tayrona architecture consisted in preventing the erosion caused by rain.